Get your new and hot Fat-Mistress Clips here - Now!

All articles tagged with "Lady Vampira"

Lady Vampira ties guy and has fun while torturing him

Lady Vampira wanted to have fun while torturing this guy. So she tied him up and she rubbed her pussy on his face. He was turned on by the smell of her pussy and he had a hard-on. He wanted to fuck her but he could not. And she teased him and played with his dick a little bit as she satisfied herself at his expense. He cried and begged her to fuck him or suck his dick but she did not. She rubbed her pussy on his face until she came.

This guy did not respect fat mistresses and lady Vampira did not like that. She had tried to ignore it but the guy was emboldened and she felt it was up to her to do something about it. So she used her high heels to trample him and humiliate him. She made him regret his choices and his opinions and he apologized before she stopped him from continuing to lick her boots.

Lady Vampira enjoys nothing better than swimming. But she also enjoys it when she uses her weight to trample, crush and smother a slave under the water 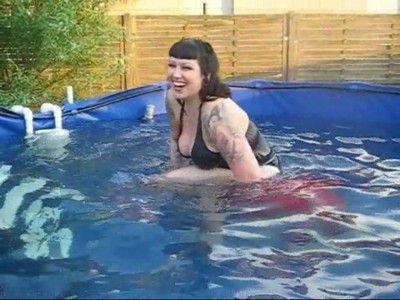